Lord Shri Krishna an incarnation of Lord Maha Vishnu was born to Vasudeva and Devaki as their eighth son in the prison of Mathura. The main motive of his avatar was to kill his maternal uncle, Kamsa and relieve the people of his evil deeds. Sri Krishna Janmasthan in Mathura or Sri Krishna Janmabhoomi Temple in Mathura is built exactly in this place. Many excavations in this site bear testimony to this fact. This is an important pilgrim place for the Vaishnavites or the followers of Lord Shri Krishna. 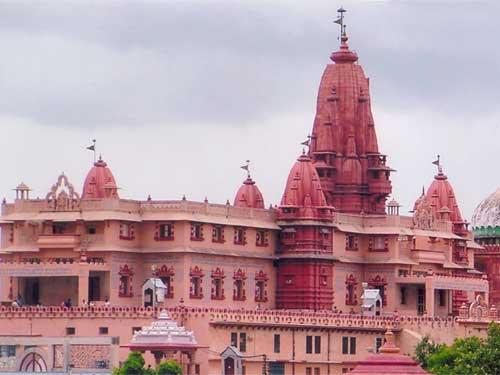 As per Hindu mythology, Lord Shri Krishna was born in the prison of Kamsa, his maternal uncle and it is believed that Lord Shri Krishna’s great grandson, Shri Vajranabha built this temple exactly on this place some 5000 years ago. This temple had been a victim of many invaders who destroyed it at various point of time in history and has been reconstructed for five times.

In AD 400, under the Gupta Emperor, Chandragupta Vikramaditya, the temple was rebuilt for the second time. During that time, the temple was immensely beautiful and there were no words or paintings to describe the grandeur of this temple. until it was destroyed in AD 1017 by Ghazni Mahmud.

When Mathura came under Emperor Raja Dhrupet Dev Janjua, a person called Jajja, this temple was rebuilt in 1150 AD. In 16th century, the temple was also visited by the Vaishnava Saint, Sri Chaitanya Mahaprabhu. Sikandar Lodi who was ruling Delhi in the later part of the 16th century destroyed this temple again.

It was for the fourth time that the Kesava Deo temple was re-built at the cost of Rs 3.3 millions when Jahangir was the Mughal Emperor. It was Raja Veer Singh Bundela of Orchha of Madhya Pradesh who carried out this work after 125 years. 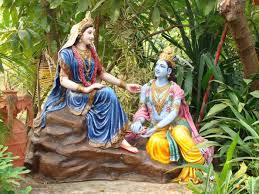 But this temple was destroyed by Aurangazeb in 1669 AD and a mosque named Jami Masjid was built in the place of the temple. The mosque was constructed by using the materials of this temple. The Britishers started ruling Mathura in 1803 and the temple area was auctioned by the East India Company in 1815 and was bought by the Banaras King, Raja Patnimal. But his wish of constructing this temple could not be completed.

It was Late Mahamana Pandit Madan Mohan Malaviya who set up “Sri Krishna Janma Bhoomi Trust” in 1951 with the help of Late Seth Jugal Kishoreji Birla. The construction work started on October 15th 1953 and completed in Feb 1982. This could not have been accomplished without the relentless efforts of people involved in it.

Inside the Shri Krishna Janmabhoomi Temple in Mathura, there is a prison like structure with a slab and it is believed that on that slab only Lord Shri Krishna took birth. People throng to have a glimpse of this place. The temple in its hay days was stunning and its architectural beauty cannot be described at all.

The temple is divided into three parts namely the Garbha Griha – the exact place of birth, Keshavadeva and the Bhagvata Bhavan. There is also a temple for Ma Yogamaya at the entrance of the temple. The temple has undergone several changes over the years and the present day temple is the representation of Hindu architecture.

The Garbha Griha Darshan timings in summer is between 5.00 a.m. and 9.30 p.m. and in winter it is 5.30 a.m. to 8.30 p.m. Apart from the daily pooja and aartis, festivals like Janmashtami, Holi and Deepavali are well celebrated. One needs to pay for the entrance fee to enter the temple. Ideal time to visit the temple is from November to April as the summer is unbearable though they lay a carpet inside the temple premises. Old people should take the help of someone while walking on the carpet.

The temple is 1.8 kms from the Mathura Railway station and takes just 4 minutes walk to reach the temple. From the Railway station head towards west and turn right towards Hathras-Mathura Road/SH 80 and turn left and pass by Bihari Plaza then you will reach the temple. You will get accommodation in the Shri Krishna Janmabhoomi Temple’s Dharmashala or in the nearby hotels which are well furnished. In case, you need luxury hotels, there are many star hotels, deluxe and budget hotels available in the Mathura city.

Mathura is an ideal place not only for your spiritual hunger but also for tasty cuisines that satisfies your taste buds. When you are in Mathura, don’t forget to buy pooja articles, curios, decorative items, clothing, handicrafts etc.

Shri Krishna Janmasthan Temple in Mathura is a must visit for all Hindus where one can feel the presence of Lord Shri Krishna.